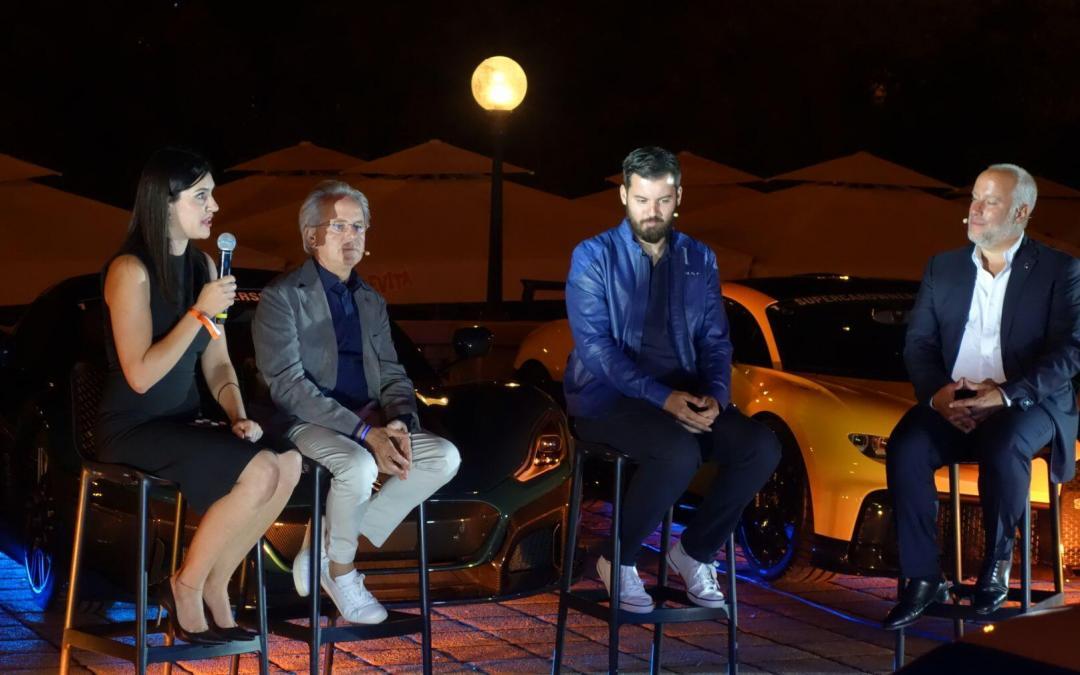 In September, Croatia hosted SOC Weekend Croatia, an exclusive three-day event organised by the Supercar Owners Circle, a Swiss network that gathers the world’s most discerning car collectors. The event started with a gala event for about 100 VIP guests, and the stars of the evening were Mate Rimac and Horacio Pagani, for whom I had the honour of interpreting from English into Italian and vice versa.

What is it like to interpret at a VIP event, how do you prepare yourself and what are the differences compared to consecutive interpreting in other circumstances? Find out in this article!

Recruitment and preparation for the assignment

The recruitment process started when the team from SOC contacted the Croatian agency Dialogo wanting to find an interpreter with both Italian and English languages. They also had very precise requirements about the look of the interpreter. The owner of the Dialogo agency contacted the president of the STIP Association, who recommended me for this occasion, considered my linguistic combination and public speaking skills.

Once I had confirmed the assignment, I received materials that helped me to prepare myself for the task. Although I had to interpret for only 30 minutes, it took me hours to research, study the terms and prepare a glossary for this specific area.

SOC Weekend Croatia started on Friday, September 3, 2021 with an exclusive gala event for about 100 guests on the terrace of the Esplanade Zagreb Hotel. Among the guests were members of the SOC and representatives of the Croatian government. The stars of the evening were Mate Rimac from Rimac Automobili d.o.o. and Horacio Pagani from Pagani Automobili S.p.A.

The highlight of the event was the conversation between Mate Rimac and Horacio Pagani during the Live Panel Show, with Niccolò Torri Rocce, SOO of the Supercar Owners Circle also participating. Since the guests in the audience were of various nationalities, the official language of the evening was English. Therefore, my job consisted of whispered interpreting of questions for Mr. Pagani (chuchotage) into Italian, and then interpreting his answers into English.

The Live Panel Show was very interesting; all participants were relaxed and easy-going, which contributed to creating a pleasant atmosphere. Rimac and Pagani talked about their own beginnings and visions, about their acquaintance and possible cooperation, and also about the future of electric cars and the automotive industry in general. The jokes and puns made this interpreting assignment even more fun.

It should be noted that before the panel, I had the opportunity to discuss with the presenter the questions he intended to ask Mr. Pagani. He explained the tone of the panel and specified in which part more serious questions would be asked, and which parts would be more laidback. Also prior to the panel, the organisers introduced me to Mr. Pagani, with whom I had the opportunity to chat informally so that we could get to know each other better.

Interpreting at a VIP event or at a meeting – what’s the difference?

When it comes to the interpreting, there is no big difference. As for any other event, the interpreter must receive materials from the client in order to be able to prepare properly for the assignment. The interpreter should then prepare glossaries which are useful for that specific project, research online resources and try to prepare for the event.

The most significant difference is the event itself. The interpreter at a gala event is often considered an ‘extension’ of the person or people for whom he or she interprets; therefore, the interpreter is always under the spotlight. For that kind of public appearance, the interpreter must be dressed appropriately and in some special cases, like this event, must respect the dress code requested by the client.

These events are usually covered by the media, so the interpreter might also experience stage fright. During this event, I wasn’t just an interpreter in the shadows or somewhere behind the audience in a booth, the way we usually work. Instead, I had to share the stage with the other speakers and the audience paid the same attention to me as they did to them. In order to overcome stage fright, voice training and public speaking workshops are very useful. Our association organised one such workshop a few months ago.

Being a consecutive interpreter at a VIP event of this level is an unforgettable experience. Having the opportunity to work with visionaries of our time, such as Horacio Pagani and Mate Rimac, was a great inspiration to me and I hope that I, like other colleagues, will have more opportunities to work on events of this kind.

Author of the article: Mirena Čalmić, translator and court interpreter for Chinese, Italian and English.

You can find out more about which cookies we are using or switch them off in settings.

This website uses cookies so that we can provide you with the best user experience possible. Cookie information is stored in your browser and performs functions such as recognising you when you return to our website and helping our team to understand which sections of the website you find most interesting and useful.

Strictly Necessary Cookie should be enabled at all times so that we can save your preferences for cookie settings.

If you disable this cookie, we will not be able to save your preferences. This means that every time you visit this website you will need to enable or disable cookies again.

This website uses Google Analytics to collect anonymous information such as the number of visitors to the site, and the most popular pages.

Please enable Strictly Necessary Cookies first so that we can save your preferences!